Awaiting the Arrival of Deadzone

I'm a pretty pro-kickstarter consumer and over the summer I pledged for the "Deadzone" campaign from Mantic Games.  The first phase has started shipping and while mine hasn't arrived I though I would get a jump on some miniatures.

The game will ship with two standard factions, the Enforcers and the Plague.  Mantic had planned to make up much of the Enforcers with hard plastic figures.  As the hard plastic was harder to work out than they anticipated, those figures are slipping to the second phase, scheduled for sometime next spring.  To make up for the slip Mantic decided to hold off any of the booster figures and replace some of the starter faction figures with the older Warpath enforcer kit.

I picked up a load of those older enforcers cheap off of ebay a while back but never got around to building them.  To get ahead on the enforcers (and to bleed off some of the anticipation while I wait for my package) I decided to put a few of them together:

These are your basic rifle toting squadies.  The Warpath kit comes with three different leg stances similar torsos and two different rifle arms.  I went with a pretty simple three up color scheme with a black wash.  The only color is to the helmet crest and shoulder pads.  I will have a different color for each part of the force (red for shooters, yellow for assault, blue for leadership and green for support).
I decided to try something new on basing with these figures.  I usually do decorated bases and often custom resin one's as well.  With the enforcers I decided to go simple with clear acrylic bases from Litko Aerosystms.  I trimmed away the awful integrated bases that come on the figures, drilled in a brass pin and then drilled that into the base.  The only real challenge was the glue.  Cyanocrylate (super glue) style glues react with moisture in the atmosphere and have a tendency to fog clear parts like the acrylic.  I tried out a glue from Testors designed for gluing clear canopies on model airplanes, but the bond just wasn't strong enough.  The method I used in the end was to use a very sparing amount of a super glue gel to keep the glue just under the figure foot pads.  There is still a little frosting on some of the bases, but it's minimal and only visible if you're really looking for it.

Using the same set of legs and torsos but a different set of arms and heads are the assault enforcers.  Unlike the riflemen there is only one set of arms available in the kit.  To get some variation to the poses I used hot water to reshape the poses.  Hopefully as time goes buy the restic material won't revert to it's original shapes.

The only heavy weapon type in the kit I bought, this will also be one of the extra figures in the box.  Not the best pose but still an ok figure.

Mantic released a digital copy of the Deadzone rules a few weeks ago.  I haven't played any test games but I have had a read through.  From just reading it looks like leader figures will play an important roll and unfortunately the Enforcer Sergeant is a figure that has slipped to the second wave.  I decided to convert one until the official models are available.  I started with an assault enforcer for all but the right arm.  I used a spare power fist from a set of corporation marines I had left over and mated it to the right arm from a burst laser figure.  To further differentiate him from the regular assault enforcers I found some utility bits from the Warhammer 40K Space Marine Scouts to put on his belt.  All in all I'm pleased with how he came out. 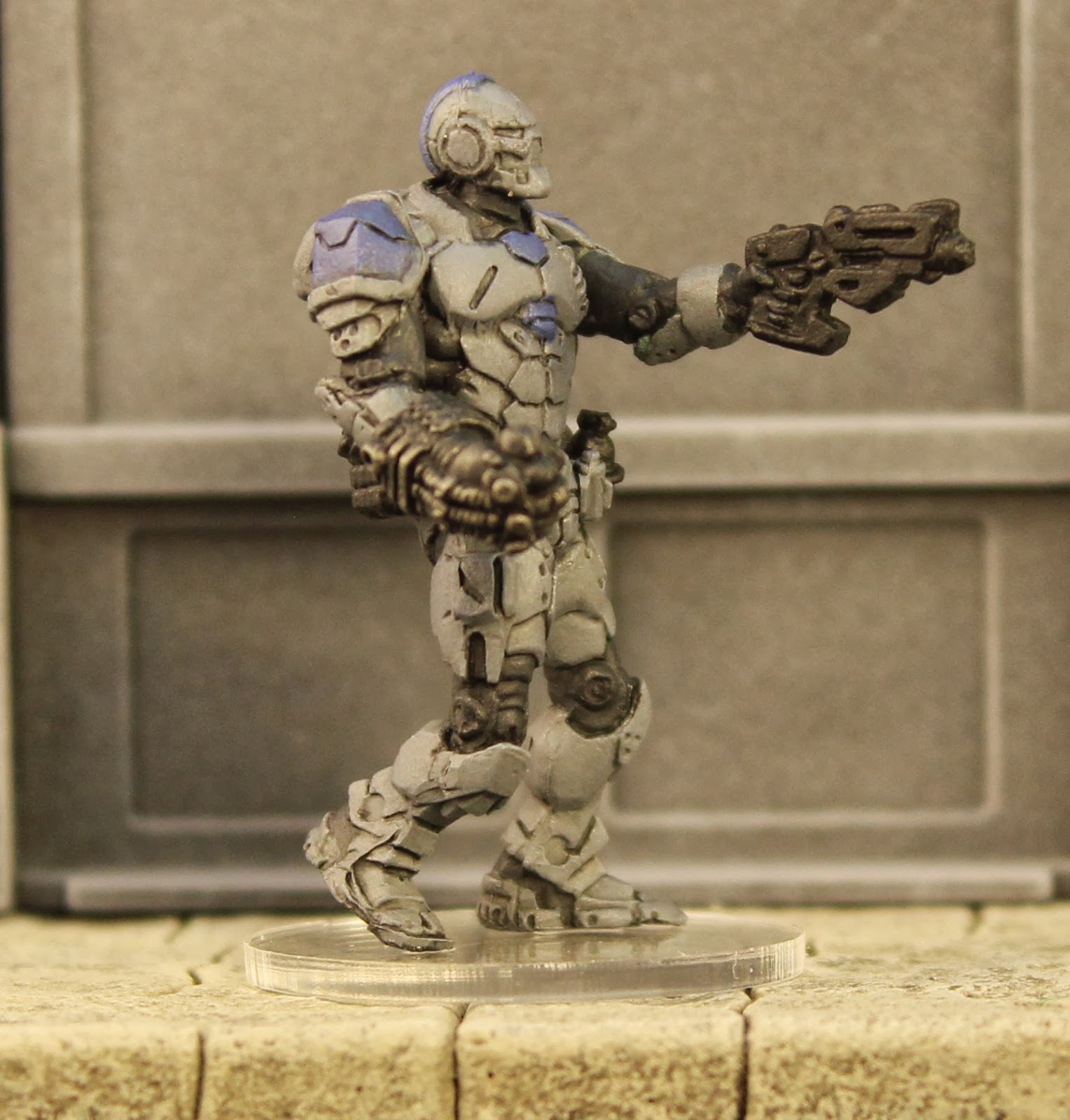 Rwwin
I'm a late 30's construction project manager with a passion for modeling and painting figures for tabletop wargaming. As a somewhat colorblind (technically color deficient) person, it's often been a struggle, but I keep at it with a “paint by the numbers” approach.